The Unprecedented Race for Development of Covid - 19 Vaccine 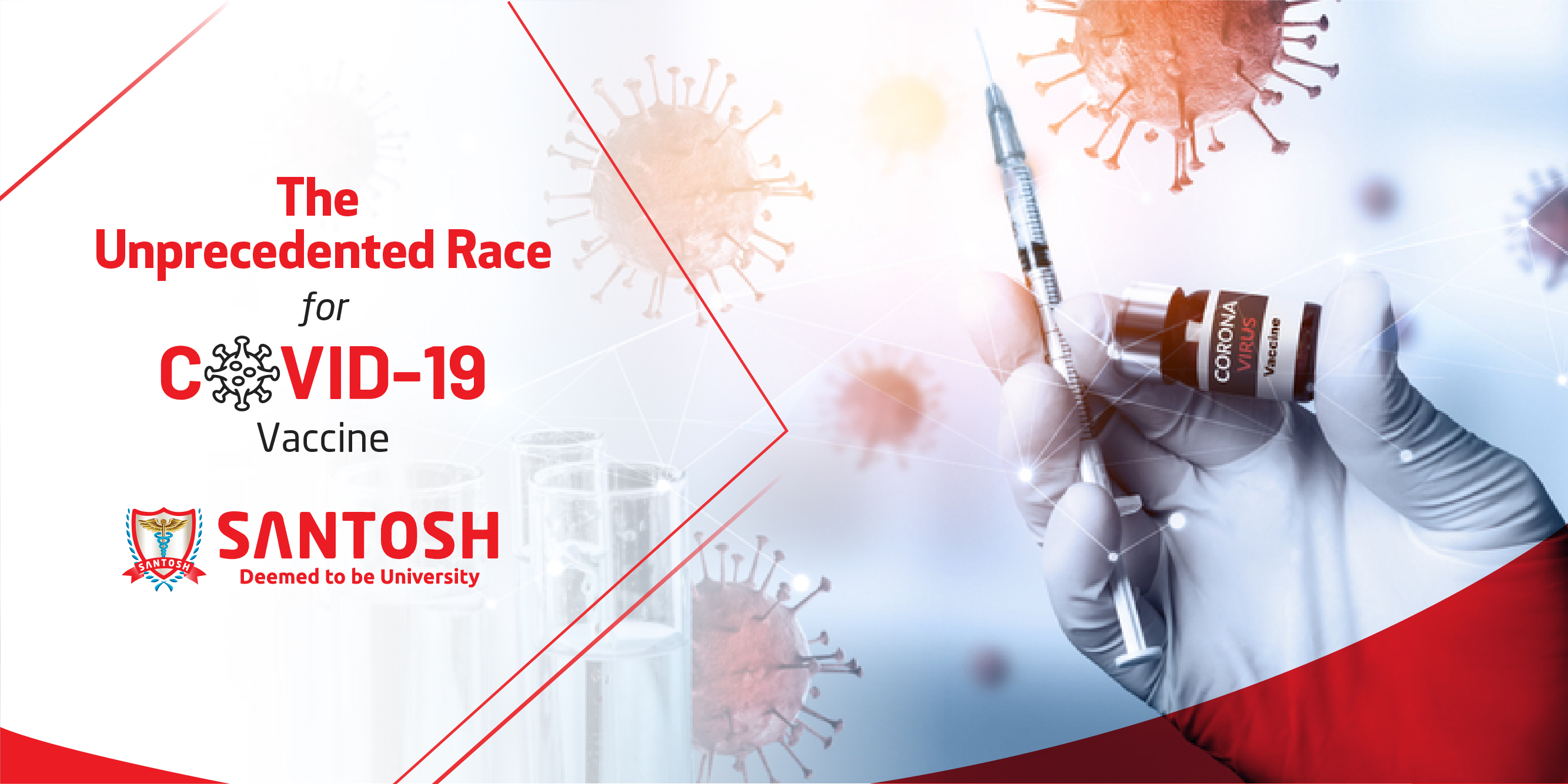 *The Unprecedented Race for Development of Covid - 19 Vaccine*

The worldwide covid 19 tally is steadily on a run and has shown no signs of coming to a halt. As the virus rages on, the world is now having higher hopes upon our doctors and researchers, who have also been the best wall of resilience yet, to find a way out through this pandemic.

In response to this global health crisis, doctors and researchers are racing to develop a coronavirus vaccine as soon as possible.

If successful, the vaccine is then to be tested, which in itself is a time consuming intensely multi-staged process with-- a *pre-clinical* testing stage on animals; a *phase 1* - on a small group of people(about 10 to 15) determining it's safety and studying the level of immune response it provokes. Here the *Phase 2* trials are basically expanded 'clinical trials', but the *Phase 3* is the most crucial of them all which is done by administering the dose, to almost a thousand people, to further confirm its efficacy.

The whole process of developing a vaccine ready for use typically takes *6 - 7 years or even more*. The case of the chicken pox vaccine development which took 34 years for its final validation is an example. On the contrary it is shocking to see that this time, the worsening on-ground conditions has somehow accelerated this already lengthy process and has brought about 100s of contenders in mere 6 - 7 months' time! The World Health Organization is already tracing about *200 candidate vaccines* globally, out of which about 25 are in their late phases of clinical trials.

Here are some of the front runners:

• *COVAXIN* - an Indian vaccine produced by Bharat Biotech Pharma, in collaboration with the Indian Council of Medical Research

• *Panacea Biotech*, a New Delhi based pharma, in collaboration with an Ireland based Firm claiming to develop a vaccine soon.

• *AstraZeneca* one of the leading candidates made by Oxford Univ, UK. It claims to have shown positive results and is in the Phase 3 trials.

•US based pharma *MODERNA*, an another leading candidate .

Now, I would like to draw your attention to the *famous yet skeptic case of Russian-SPUTNIK-5 vaccine*, which was recently granted approval by the Country's government.

Russia claims to have finally been the first country to have developed a vaccine successfully. Sputnik-5 seems to be potential, but as yet, *not verified* by other countries. So how effective is it? No one knows as yet and with it coming out so quick, raises suspicion.

• It was tested on hardly a hundred people in its phase 1 and 2 trials and so it becomes difficult to believe in its efficacy and approve of it.

• Sputnik-5 is a 2 - dose vaccine, and yet patients were tested with only one dose in the first and second phases.

• In comparison to 8 other vaccines that are already in phase 3, with them having about close to 30,000 to 60,000 people being tested, the phase 3 trials of Sputnik-5 include merely 2000 people for testing which is scary.

• It is to be noted that the results of none of these trials of this vaccine are published or reviewed anywhere, making it quite a skeptic case. And surprisingly though, the vaccine has already been testified much before the results of the final phase 3 trials were out, and now has also been officially registered to become the *WORLD'S FIRST COVID - 19 VACCINE* !

So what exactly the registration of Sputnik 5 mean is that it will still have 'restricted use' only on a selected group of people until 2020. It would be validated for public use globally, only after this year.

• Even after all of the glitches in the clinical trial phases and hasty inaccurate results, it is surprising to see that the Governments of many countries are taking risks and are heavily investing in vaccine development as soon as possible.

What can we conclude from this?

One thing that the pandemic has taught us, is that -- *science is nothing if it doesn't translate into actions on ground* .

For example, developed countries that were expected to tackle the pandemic easily by virtue of their profound wealth or infrastructure, were ironically amongst the worst hit countries. Mega nations like the United States, or the United Kingdom were so badly affected, that they still are trying hard to cope up with their losses.

Under such pressure, the Governments are forced to authorize *'emergency use'* of vaccines even without without fully establishing efficacy and safety of vaccines. This is exactly what has happened in case of Russia's Sputnik-5.

The fact that India and 20 other countries are participating in Sputnik 5 phase 3 trials, is a clear proof of the huge pressure these countries are under. So much so, that they are even taking the huge risk of not following the proper safety protocols in a haste to acquire a Covid vaccine as soon as possible.

To us common people, all of this just comes down to the suffering of the masses, and that protocols are merely instruments of perfection and low casualty.

*A ray of hope to fight the virus as soon as possible; a hope that maybe, sometimes, it's riskier to not take a Risk.*