Proteins are the first of the molecules of life and they are really the building blocks of life. Proteins are the most common molecules found in cells. If all the water is removed from a cell, proteins make up more than half of the remaining weight. Proteins are the polymers of amino acids covalently linked by the peptide bonds.

The building blocks of proteins are the twenty naturally occurring amino acids. Protein molecules are involved in a range of aspects of a cell’s biology. They come in a huge variety of forms and perform a massive range of functions. They are involved in muscle movement, storage of energy, digestion, immune defense and much more.

The next of the four molecules of life are carbohydrates. Carbohydrates are an important source of energy. They also provide structural support for cells and help with communication between cells. A carbohydrate molecule is made of atoms of carbon, hydrogen and oxygen. They are found in the form of either a sugar or many sugars linked together.The simplest carbohydrates also contain either an aldehyde moiety (these are termed polyhydroxyaldehydes)or a ketone moiety (polyhydroxyketones). All carbohydrates can be classified as either monosaccharides, oligosaccharides or polysaccharides.

Lipids are a highly variable group of molecules that include fats, oils, waxes and some steroids. These molecules are made mostly from chains of carbon and hydrogen called fatty acids. Fatty acids bond to a range of other types of atoms to form many different lipids. one of their major functions relates to the formation of biological membranes (phospholipids and cholesterol), lipid molecules are also essential for energy storage and transport (triacylglycerols), cellular binding and recognition and other biological processes (glycolipids), signaling (steroid hormones), digestion (bile salts), and metabolism (fatty acids, ketone bodies, and vitamin D). Lipid molecules are mainly hydrophobic and are, therefore, found in areas away from water molecules or are involved in mechanisms such as lipoprotein complexes that allow their movement in and through water environments.

The final of the four molecules of life are the nucleic acids. There are two types of nucleic acids that are essential to all life. These are DNA (deoxyribonucleic acid) and RNA (ribonucleic acid). DNA is a very well-known type of molecule that makes up the genetic material of a cell. DNA is responsible for carrying all the information an organism needs to survive, grow and reproduce. RNA is the genetic material of certain viruses, but it is also found in all living cells, where it plays an important role in certain processes such as the making of proteins. 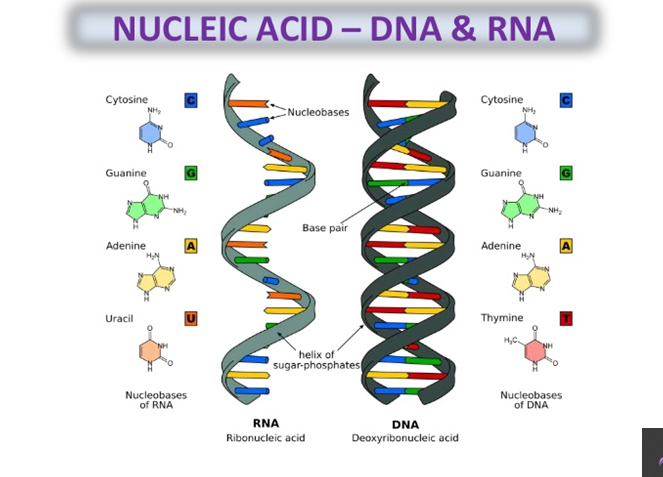