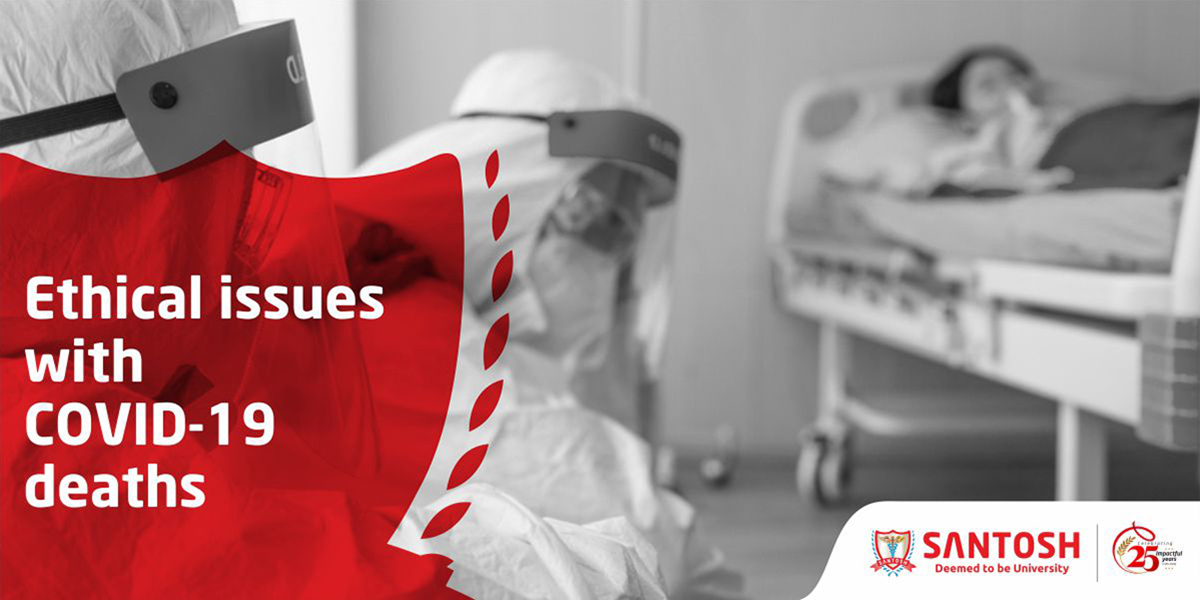 It has been now more than 8 months that the whole world is facing the wrath of covid19 with heavily disastrous outcome in terms of mortality & morbidity. While losing a loved one to the disease caused by the novel coronavirus is tragic enough, what is even more heart wrenching for the family and relatives is not being able to give the dead a dignified farewell.

A civilised society is governed by moral principles called Ethics which govern a person’s behaviour, actions conductingand conducting an activity.These Ethics teach us

The fact before man & God is that unintentionally,we have not been able to do so directly or indirectly   in the times of covid19 i.e. we have not stood by our Ethics.These ethical failures are tormenting experiences to all of us as well as to the near & dear ones of covid affected.

The ethical problems faced bypublic or a common person

A) International and national health guidelines have emphasised that the coronavirus does not spread through dead bodies if adequate safety precautions are taken while handling them. But general ignorance about this left several Covid-19 patients with no dignity in death. E.g.

1. Some bodies were shunted around from one funeral ground to another.

2. Some had to be buried or cremated with police protection.

3. Many have been abandoned by their own families.

B) As per the SOP issued from govt.,For COVID-19, the body is not to be handed over to the next of kin. The body should directly be taken to the crematorium for final rites.

EXAMPLE OF MR X (name changed): It was the first Covid-19 death in the Hindu community. And according to custom, his body was meant to be cremated before sundown.MR X contacted the crematorium in a place Z(name changed), he was faced with an unexpected rejection. Local residents near the crematorium were afraid that the smoke from the pyre would spread the novel coronavirus, and refused to let last rites of FATHER of MR. X take place there.

D) With every life lost, loved ones haveto makeheart-breaking decisions to compromise on traditional rituals and condolence practices. They have to choose between the emotional trauma of grieving alone and the risk of spreading the virus by opening their doors to family and friends.

E) We have witnessed overcrowding at the city's crematoriums, with grieving families waiting for hours in long queues outside crematoriums, at times only to be asked to return.

EXAMPLE: A funeral worker at a crematorium was quoted saying that “We are allowed to dispose only 20 bodies a day, 10 in each furnace. But the number of dead bodies has seen a sharp increase in the last one month or so with at least six to seven bodies waiting outside at any given time,"

F)But the hassles related to COVID-19 deaths begin much before the body leaves for cremation.

* Ambulances not reaching on time,

* Relatives refusing to claim the body of their loved ones

* Families insisting on carrying out last rites despite clear guidelines against the same,

* And the trauma of moving from one burial ground to the other, for a lack of space and overcrowding of bodies

H) Policy and guidelines on handling the dead bodies of COVID-19 patients keep changing from time to time, adding to confusion among doctors, hospital authorities and patient's families. While earlier hospitals were strictly forbidden from handing over the bodies of suspected COVID-19 cases to relatives for cremation, later on  the Union ministry relaxed the guidelines on the same. From now on, people will not have to wait for laboratory confirmation of the infection to receive the body.

I) the problems actually begin right from the time an official inside the hospital has to ascribe the death to COVID-19 in a co-morbidity patient . "Most of the time if a patient has had an additional  co-morbidity & died due to covid,, the death is  presumed to have occurred because of that and not due to COVID-19. This in itself is both, unethical and wrong,"

J)The following is very traumatic ,torturing and humanly unethical for a very close near ones: As per the SOP, relatives of the deceased will not be allowed to conduct the final rituals and will be allowed to observe the body from a distance of at least a metre. The body should be filled with sodium hypochlorite after post-mortem and it is to be ensured that no liquid comes out of the body. The order further states that the dead body should be packed in a leak-proof plastic bag. The outer part of the plastic bag should be sanitized and covered in a mortuary sheet or cloth given by the deceased's family members. Clothes and other used items of the deceased must be put in biohazardous waste bins. If samples of the deceased return positive for COVID-19, the body is not to be handed over to the next of kin

K) DELIMA DUE TO QUARETINE

EXAMPLE:‘When he died, I could not be with my family’

For those who lose a loved one to the virus, perhaps the biggest challenge is being quarantined, and missing the emotional support that many draw from group prayers, religious rituals and condolence visits from relatives and friends.

When Chandrakant Patel tested positive for Covid-19 and was hospitalised on June 18, his wife, brother and daughter were immediately quarantined at a public health centre in Jambusar. Punit Patel, who works in Gurgaon, rushed to Gujarat on the first flight he could get, but could meet neither his father nor the rest of his family.

“I had not seen my father in six months. And when he died, I could not be with my family,” said Punit. “We could not do the twelfth and thirteenth-day poojas at home, so I had to do them alone in a temple – just the priest and me.” This has been particularly difficult for the older members of the family, because of their religious belief that group prayers help liberate the deceased person’s soul.

L) DELIMA DUE TO LOCKDOWN & APATHY OF DOCTORS

‘We could not even get her photo framed’

In Mumbai, 50-year-old Sanjay Chavan was himself stuck in a hospital when his wife, Vaishali, died on May 5. The couple had been admitted to Dattatreya Nursing Home with sudden and similar symptoms of pneumonia and typhoid, but 44-year-old Vaishali died before she could be tested for Covid-19.

“For the three days that she was in the hospital, the doctors did not ask whether she was on any other medication, and she ended up missing her regular thyroid medicines,” said Chavan, a conductor with Mumbai’s BEST public bus service. Chavan is not sure what specific thyroid disease Vaishali suffered from, but believes that she died of hormonal imbalance caused by the missing medication. “She was not in any state to remember her medicines, but the doctors should have asked her.”

The day she died, Chavan was on oxygen support in the same ward, watching the doctors’ failed attempts to save his wife. “It was just two days before our 23rd anniversary,” he said.

The couple’s children – a 21-year-old son and 17-year-old daughter – were left alone to manage their mother’s funeral, with the help of a few neighbours from their chawl in Santacruz. Chavan’s mother-in-law, who lives with him, was too grief-stricken to help. “Because of the lockdown, none of our relatives could come to support us,” said Chavan. “And in the middle of all this, my children had to look after me too.”

FROM DOCTORS POINT OF VIEW:

The most pressing dilemmas that have emerged to this point are raised by shortages of essential resources, especially personal protective equipment (PPEs) for frontline clinicians and the looming prospect of having to make extremely difficult decisions about which patients will, or won’t, have priority claim on our limited supply of ventilators

3. With a shortage of PPE, what ethical dilemmas do physicians face when it comes to caring for patients who may be infected with COVID-19 but the doctors lack the proper equipment to safely treat the patient?

4.Many physicians have young children or elderly parents at home. Is it ethical for them to not show up for shifts at a hospital where COVID-19 is prevalent? How should physicians keep their families safe while still meeting their ethical obligations as a doctor?

5.Ethical problems arising by not allowing end-of-life visits by family members, leaving someone to die alone