Lichen planus is a mucocutaneousdisorder which involves various mucosal surfaces either alone or along with involvement of skin. It most commonly involves the oral mucosa when compared with other mucosal site. Lichen planus is believed to result from an abnormal T-cell-mediated immune response in which basal epithelial cells are recognized as foreign because of changes in the antigenicity of their cell surface.3 The cause of this immune-mediated basal cell damage is unknown. Likewise, it is unknown if lichen planus represents a single disease process or several closely related entities with similar clinical presentations. A recent immunologic comparison of 2 variants of OLP suggested that different immunopathogenic mechanisms might be involved.Lichen planus affects primarily middle-aged adults, and the prevalence is greater among women.Children are onlyrarely affected. The classic skin lesions of the cutaneousform of lichen planus can be described as purplish, polygonal, planar, pruritic papules and plaques. These skin lesions commonly involve the flexor surfaces of the legs and arms,

The nail beds may also be affected, with resultant ridging, thinning and subungual hyperkeratosis.7 Scalp involvement, if untreated, can lead to scarring and permanent hair loss. Since 30% to 50% of patients with oral lesions also have cutaneous lesions, the presence of these characteristic cutaneous lesions can aid in the diagnosis of OLP. Several types of OLP have been described, the 2 main types being reticular and erosive OLP.2 It is not uncommon for the same patient to present with multiple forms of OLP. 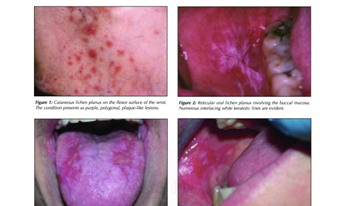 The most widely accepted treatment for lesions of OLP involves topical or systemic corticosteroids to modulate the patient’s immune response. Topical corticosteroids are the mainstay in treating mild to moderately symptomatic lesions.Patients with OLP should be counselled as to the nature of this chronic condition and the different approaches to treatment. Patients should be informed that they may experience alternating periods of symptomatic remission and exacerbation. Clinicians should maintain a high index of suspicion for all intraoral areas that appear unusual, even in patients with a histologically confirmed diagnosis of OLP.This vigilance is especially important for isolated lesionsoccurring in locations at higher risk for the development ofsquamous cell carcinoma, such as the lateral and ventralsurfaces of the tongue and the floor of the mouth.